Skip to content
Bonus and offersCasino GamesPayment OptionsTips and Tricks 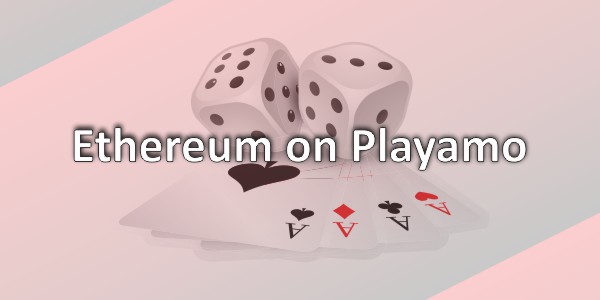 Ethereum on Playamo: What You Need to Know

Though it is becoming increasingly common and more widely accepted, there is no denying that cryptocurrency is still a fairly foreign concept to many traders, gamblers and financial fans. This is a trend that has hit every area of commerce in recent years, including online shopping, financial trading, and, of course, the world of online casinos and gambling. While BitCoin is the brand that most often hits the headlines, there is also a great deal to be said for its less popular and well-known relative: Ethereum. This is a fantastic alternative to the traditional casino payment options and can be used in everything from free spins to cashing in on bonuses.

In the simplest terms, Ethereum is a global and decentralized platform for applications and, most commonly, money. It allows you to write and produce codes to control money and build applications that can be accessible to anywhere in the world.

This is a model which works in a similar way to Bitcoin, Ethereum is a distributed public blockchain network. As any cryptocurrency geek will be aware, a blockchain is a sequence of interconnected devices or ‘nodes.’ Nodes are electronic devices, which could include a printer, a smartphone, a computer or a tablet – anything which can connect to the internet. A node could store a copy of al or some of the information recorded on a blockchain, process transactions, add transactions to a blockchain, approve and broadcast transactions, or put them into blocks. Ethereum is public, meaning that it can be easily viewed by anyone with the necessary information.

Is Ethereum Different to BitCoin?

Though BitCoin and Ethereum are similar in many ways, there are key differences. The main distinction is that the two brands are very different in terms of their capability, and their intended purpose. BitCoin can offer a very certain type of blockchain technology – a peer to peer cashless system, which allows BitCoin payments to be made and transferred between participants. The BitCoin blockchain can be used to track ownership of the digital currency, while the Ethereum blockchain focuses more closely on the actual running of the programming code of any decentralized application.

As opposed to mining for BitCoin, the participants work to earn a different type of crypto – Ether. This currency is used by the application developers to pay service and transaction fees on the Ethereum network. As you can see, despite apparent surface similarities, there are actually a number of differences between these two options. This allows them to be used and made the most of in a number of different ways, by different miners, customers, and third parties.

What Are the Benefits of Ethereum?

When it comes to the battle of Bitcoin over Ethereum, the latter is still often considered the underdog. In actual fact, however, Ethereum can have a number of benefits which help it to sit head and shoulders above its biggest rival, and these include:

As one of the first cryptocurrencies, BitCoin undoubtedly revolutionized the technology of the time, In the 9 years since its inception however, things have moved on. Ethereum is able to run on smart contracts, making the most of the very latest in technology, and this is a trend that only looks set to continue.

The relative youth of Ethereum also means that there are a far greater number of coins up for grabs, and this is sure to be music to the ears of newcomers to cryptocurrency! Bitcoin has a known coin supply of 21 million BTC, while Ethereum has around 92 million coins currently in circulation. It also has the added bonus of being an inflationary currency – there is no fixed minimum supply cap. This makes it super exciting, and subject to even further change and evolution.

One of the unexpected by pleasant bonuses of Ethereum is its value in fundraising. The donation site Platform is entirely Ethereum based and is hugely increasing in exposure and popularity. The self-interest of users is mixed with that of social communities, and these come together to make real change. The Ethereum platform is set up to help those who need to access this, while BitCoin is run in a way that far more closely resembles a traditional bank.

The addition of cryptocurrency as a legitimate payment method is still fairly, new, and this is especially true in the world of online casinos and gambling. Despite the inexperience, this is fast emerging as one of the most popular ways for players to make deposits and withdraw winnings, and it is easy to see why. Using cryptocurrency helps users to enjoy a safer, more secure casino experience, and can be a great way to make the most of each and every penny of a deposit. The number of casinos that accepts cryptocurrency is growing every day, and this is becoming a super popular way to enjoy the best games, deals, and offers. Bitcoin is the most popular method for many sites, but Ethereum is fast playing catch up and has its own rewards and benefits.

How Do Ethereum Casinos Work?

In many ways, Ethereum casinos work in a way that is similar to BitCoin sites. The difference is primarily in the sophistication of the system, and the ‘smart contracts’ feature which is a key selling point of this currency. This allows two parties to sign a digital contract, which is linked to a particular circumstance, for example, that 10 ETH will be paid out, should the roulette fall on the black. In a way, this is similar to an Escrow service – if the player wins, the payment is automatically released. This is a major advantage of the system, as it allows any winnings top to be released instantly, with no longer processing times or waiting periods.

The blockchain is the primary factor here; all infrastructure is kept on the blockchain, and this established a transparent, easily accessible and super reliable system that allows any participant to take control whenever they wish. Privacy and anonymity are major factors here; customers are able to sign up anonymously, check out the fairness of all games on offer, and play from anywhere around the world. Using Ethereum allows control of the game to be taken from the casino – in this case Playamo – and placed back directly into the hands of the players.

In addition to changing social assistance, offering a chance to rewrite code and maximize profit, there is another area in which Ethereum is gaining momentum: online casinos. One of the biggest players here is Playamo, which is one of the few sites currently accepting Ethereum as a deposit and withdrawal method. In achieving this, they are leading the way in the market, and it seems that it is only a matter of time before Ethereum is an accepted currency across the industry, offering total transparency and control to the players.

Your Safety Guide to Gambling in New Zealand
January 29, 2020

Your Safety Guide to Gambling in Canada
January 28, 2020

If you like Rich Casino you’ll love BetVoyager
January 22, 2020